Chase Anderson Called Up By Diamondbacks 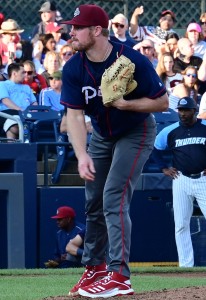 Anderson was born in Wichita Falls, Texas, and helped his father with the family business. He was a standout pitcher for the Blacksox organization and also at S. H. Rider High School, pitching three no-hitters as a senior in 2006 and setting a school record for career strikeouts, but his slender build limited attention from college baseball recruiters. He spent two seasons with North Central Texas College before transferring to the University of Oklahoma for the 2009 season. The Diamondbacks selected Anderson in the ninth round of the 2009 MLB Draft. He spent the next several years rising through the team’s farm system, suffering a setback in 2011 when an elbow injury caused him to miss nearly the entire season. Anderson made his major league debut for the Diamondbacks in 2014.

During the 2016 offseason, Anderson was part of a major five-player trade between the Diamondbacks and Brewers. His performance continued to improve, setting career highs in wins in 2017 and innings pitched in 2018. Going into 2020, the Brewers traded Anderson to the Toronto Blue Jays, where his performance suffered amidst a shortened season. He spent most of the 2021 season on a one-year contract for the Phillies, but closed out the year in the Texas Rangers minor league system.

During Anderson’s initial call up to the major league club, he absolutely destroyed opposing hitters in Double-A. In six starts, hethrew 39 innings and allowed 3 earned runs, for an ERA of 0.69. A K:BB ratio of 38:6