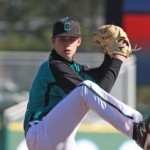 Blacksox Alum projected to be an early draft pick…

Ben Smith, a key member of the Blacksox 2010 AABC World Series Championship squad has emerged as one of the top pitching prospects in the country.

The Coastal Carolina junior has been ranked 48th on Baseball America’s College Top 100.

Smith earned first team All-Big South honors and played an important part of Coastal’s success in the 2013 season. The southpaw made 16 starts and pitched a team-best 92.2 innings. Smith posted a 5-4 record with a 2.23 ERA as he helped the Chanticleers reach a seventh straight NCAA Regional. Smith also led the team with 83 strikeouts and held opponents to a .219 batting average. In league play, Smith was 2-1 in eight starts with a 2.36 ERA and .176 opponent batting average.

During the 2013 summer, Smith competed in the prestigious Cape Cod League where he was a member of the Cotuit Kettleers. During his time there, Smith made seven starts and totaled 28.2 innings as he helped the Kettleers to a 25-18 record. Smith went 2-0 with a 2.82 ERA and a team-high 35 strikeouts while walking just 11 batters. Smith was named the 23rd-best pro prospect from the Cape Cod League by PerfectGame.org.